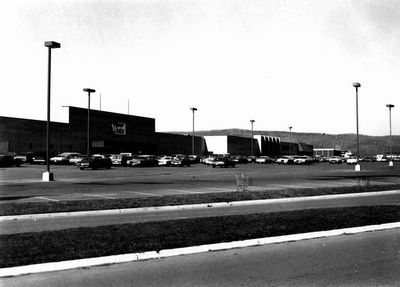 University Mall, Blacksburg, Virginia. An exterior view from University City Boulevard, circa 1976. Woolco is on the left, the mall entrance is in the center, and Heironimus is on the near right, with Kroger in the darker building beyond. (University Libraries, Virginia Tech) 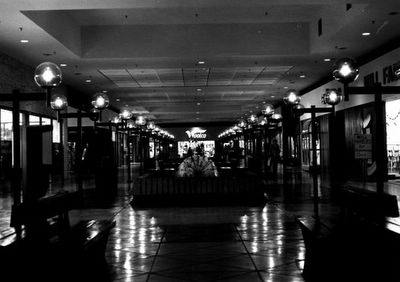 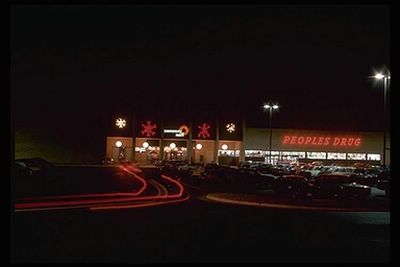 I ran across vintage images of University Mall in Blacksburg, Virginia on the Virginia Tech image database. They capture the short but important glory years of the small enclosed mall located just off the Virgina Tech campus, at the intersection of Prices Fork Road and University City Boulevard.

University Mall opened in 1974 and remained unchallenged in Montgomery County until the larger, more centrally located New River Valley Mall opened in nearby Christiansburg in 1988. Originally anchored by Woolco, Heironimus, and Peoples Drug, with a Kroger and SupeRx Drugs adjacent, the mall had about 30 stores at its peak.

Woolco was replaced by Roses in 1983 and by the Virginia Tech Math Emporium computer center in 1995, Peoples was replaced by Revco in the late '80s and by CVS in 1997. Heironimus held on until 1995, replaced by University Bookstore: Volume 2. The small shops were largely replaced by a massive fitness center, The Weight Club. Kroger took over the SupeRx space and is now the largest non-Virginia Tech-related tenant at the mall.

Unlike many small enclosed shopping centers with dwindling retail options, the interior mall is still open at University Mall. In fact, it's now receiving a much-needed renovation. There are still about 10 stores inside and hopes are that more will come, though it's not looking too promising on that front.
Posted by Livemalls at 10:06:00 PM