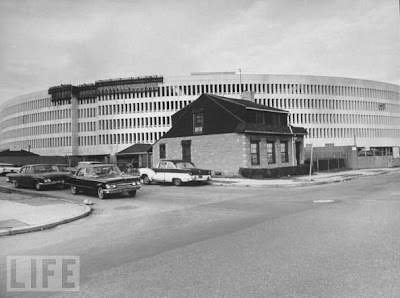 The above photo submitted by LiveMalls contributor Lou C. tells an interesting story.

In the early 1960s, the R.H. Macy Company began planning a new store in the Elmhurst section of Queens, New York, near the Long Island Expressway. The building was originally planned as a traditional rectangular construction designed to replace several blocks of residences. However, the owner of the corner property, Mary Sondek, staunchly refused to sell what had been her childhood home.

Specifically, she reportedly refused to sell a 7×15-foot back corner of her lot to Macy's for $200,000 because she wanted her dog to have a place to play. As a result, the department store was reconfigured as a circle (with a small cut out of one side) overshadowing the tiny brown shingled house, where Ms. Sondek, a mother of six, continued to live until her death. Her home, that she fought so tenaciously to preserve, was soon leveled and a strip mall was squeezed into the site so close to Macy’s that the two are almost touching.

Despite the divot, the store was still considered the world's largest round retail building. Skidmore Owings & Merrill designed a circular, three-level building that echoed the futuristic pavilions of the 1964-65 World’s Fair just one mile away in Flushing Meadows-Corona Park. Behind the 142-yard diameter Macy’s rotunda were two circular parking ramps that gave access to the parking garage that ringed the entire structure allowing shoppers to park close to any department in the store. In front of the coliseum-like building was a smaller, circular First National City Bank which, with the parking ramps, gave the appearance of moons orbiting a planet.

Macy's no longer has a department store at this building, though there is a still a Macy's Furniture Gallery here. In 1995, it was converted to Stern's and later closed by Federated Department Stores. The building now contains the Queens Place Mall; and Macy's has a location at the nearby Queens Center.

Sources: Life magazine, The Universe of Discourse, Wikipedia, HollisNY.com
Posted by Livemalls at 12:38:00 AM