Encompassing 182,458 square feet, the Chevy Chase Bloomingdale's is the chain's newest location in the Washington area. 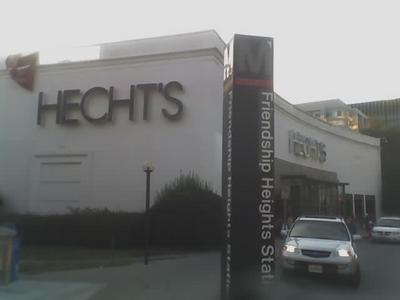 Since 1947, this site has the location of a department store. Woodward & Lothrop operated here from 1947 to 1995, one of its first suburban locations. When Woodies went out of business, Hecht's took over the store and operated it from 1995 to 2006. Hecht's had planned on replacing the store building with a new one, but its parent company's sale to Federated Department Stores (Macy's, Inc.) changed the course somewhat. Federated decided to rebrand the store as Bloomingdale's and drastically changed the interior design.

From the press release:

The overall design of the store is quite contemporary and contains updated variations of the signature black & white image of the New York City flagship store. Interior design is the product of Mancini Duffy Architecture & Design. The Chevy Chase store features a 40-foot circular atrium topped by a skylight. Glass-enclosed escalators transverse the atrium and enhance the sightlines to all floors. Four, three-story black glass clad columns punctuate the atrium. Balustrades are clear glass and stainless steel.

Black granite and black mirror are used generously, and each major merchandise classification is edged in black lacquered portals and ceiling detailing reminiscent of prosceniums to showcase the product presentations.

Level One has a direct entrance off Western Avenue; separate, direct elevator and escalator links to the underground parking decks; and a future entrance to the open plaza currently under construction at Wisconsin Place Center. Level One houses Cosmetics, Fashion Accessories, Handbags, Women's Shoes and Jewelry, and Dresses, Coats, Swimwear, Luggage and a Fur Salon.

Cosmetics and Accessories dominate the center of the main floor with the unmistakable black & white checkerboard floor that is a Bloomingdale's trademark. Key cosmetic vendors include Bobbi Brown, Chanel, Kiehl's, Jo Malone and Laura Mercier. There are Handbag shops for Marc Jacobs, Coach, Longchamp, Ferragamo and Burberry. The open plan places the vendor shops at the perimeters and brackets the floor.

Women's Shoes is segmented into a series of alcoves, richly appointed with residential furnishings and over-sized beveled mirrors framed in black mirror for further dramatic impact. The walls have over-scaled consoles and open cabinets that give the area an eclectic feel. The assortment is focused on contemporary upscale designer and bridge vendors like Fendi, Sigerson Morrison, Ferragamo, Taryn Rose, Burberry, Coach, Kate Spade and Donald Pliner. The Shoe area opens with a strong presence in the boot and bootie category.

Directly inside the Western Avenue entrance sits Dresses, with its strong focus on social occasion apparel and Coats. Dress vendors include Carmen Marc Valvo, BCBG, Mark Bauer, Chetta B, Laundry and Tadashi. The Coat department is headquarters for one of this season's major trends-- the statement coat, from Burberry, Cinzia Rocca, Hilary Radley, Mackage and George Simonton in an environment of cream and putty with accents of brushed silver and dark wood.

Level Two features Designer and The New View, YES, Sutton, Intimate Apparel and At Your Service.

The first impression of the second floor is dominated by The New View and Designer collections. The center shops are accented in black mirror that brackets and segments the shops. There are full height, windowed alcoves in three locations on this floor, offering glimpses of natural daylight and adding useful backdrops as these are also entrances to fitting areas. Each of the store's 65 fitting rooms has been given careful thought, and been generously sized as are the luxurious seating areas throughout the store.

YES is set to one end of the floor yet is more exposed to The New View since even here the collections content has been enhanced to offer the latest style and trends in contemporary apparel. Collections will include Diane von Furstenberg, Theory, Vince, Juicy, Robert Rodriguez, Catherine Malandrino, Alice & Olivia, Milly and exclusive collections including Aqua, Quotations and Portfolio. The area also offers an extensive assortment of premium denim from Rock & Republic, Diesel, True Religion, Anlo, 7 for all Mankind, Citizens of Humanity, Page and James. The merchandise is arranged to allow for a mixing of styles and facilitate easy cross selling. There are large rear-projection screens anchoring the YES area that add a note of animation.

Level Three features Men's, the new Home Store and The Registry. Arrival to the top level is under a circular skylight and a carefully balanced mobile by New York sculptor Brandon d'Leo.

The center of the floor is a broad atrium that serves to segment the two distinct businesses of Men's and Home. Men's is set in a series of contemporary statements accented by dark, polished walnut and lighter ash accents. Segmentation distinguishes between the tailored and casual categories. There are shops for Polo Ralph Lauren, Armani Collezioni, and Ralph Lauren Black Label and Canali. More tailored clothing presentations include Boss Hugo Boss, John Varvatos, Burberry, Andrew Marc and Z-Zegna. Bridge and Contemporary collections include Hugo Boss, Marc Jacobs, Helmut Lang and Michael Kors. Men's Shoes are set into one of three full height windowed alcoves and has a masculine, clubby feeling in design and furnishings. In an opposite alcove, an extensive denim shop sets the tone for a more casual and contemporary lifestyle.

The Home Store is an entirely new Bloomingdale's concept, making its debut at Chevy Chase. The area has been designed to resemble a series of galleries with two dark chocolate arched entries distinguishing the space flanked by two huge, 25 feet wide main aisles. Here the merchandise mix has been carefully edited to offer the best of Bloomingdale's assortments, assembled into lifestyle groupings on very flexible floating pads. Barbara Barry, Thomas O'Brien, Ralph Lauren and Calvin Klein will anchor the corners of the floor and provide an edited mix of their total lifestyle assortment.

Down the center of the two main aisles, tabletop and home accents are mixed with key furniture pieces. There are two major classifications here in the galleries: Casual/Contemporary and Updated Traditional. The center galleries are set on bleached bamboo floors. There are accents of black lacquer and chocolate. Wall surfaces are artist's white. Customers can view a stimulating mix of merchandise in easily relatable settings with all of Bloomingdale's best home designers integrated throughout. Two trend areas complete the total home presentation and will change every quarter. Key domestics vendors include Bellino, Charisma, Donna Karan Essentials, Josie Natori, L'Erba and Sferra 1891.

Across the width of the area, toward the rear, are shops for the kitchen featuring clever gadgets, electrics and cookware, and shops for regency crystal and silver, with walls resembling polished concrete. Key tabletop vendors include Baccarat, Christofle, Faberge, Lalique, Michael Aram and William Yeoward; and in housewares, Alessi, All Clad, KitchenAid, Le Creuset, Nespresso, Shun, WMF and Wusthof.

The Registry is located in the center of the rear wall between the kitchen and crystal shops and houses two distinctly different areas--the very modern "Registry Bar" where couples can update their registry in a less formal, open environment and the more intimate consultation area where couples will enjoy their first appointment. The entryway is lined with lit glass cases that display Bloomingdale's top china, crystal and silver patterns.