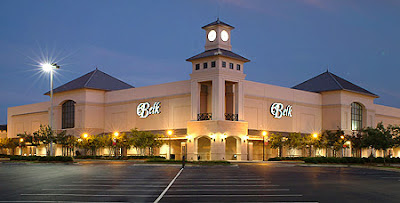 This Belk store opened as a McRae's Department Store (rendering at left) on April 17, 2002, with 114,000 square feet of space on two levels. It is the main anchor store of the Dogwood Festival Market, Mississippi's first lifestyle shopping center, located just outside Jackson in the bedroom community of Flowood. The store was designed by Dean and Dean/Associates Architects of Jackson and dedicated in honor of the 100th Anniversary of McRae’s.

On March 8, 2006, this McRae's store, along with the rest of the chain. was converted into Belk stores. Belk acquired the chain in July 2005 from Saks Incorporated.
Posted by Livemalls at 12:16:00 AM