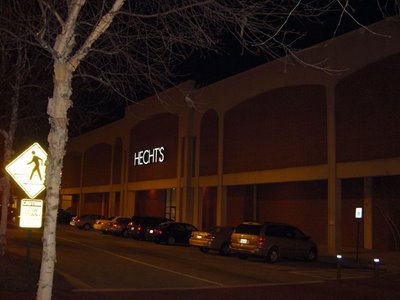 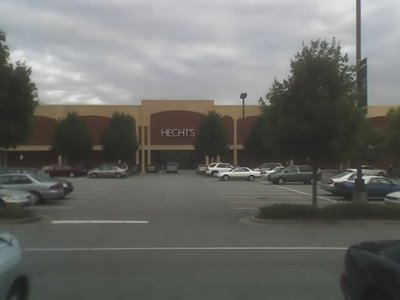 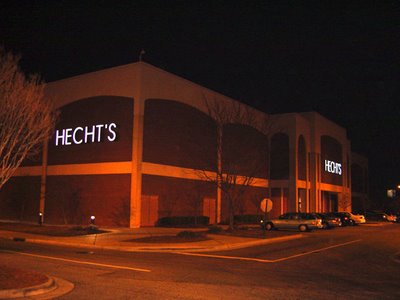 The Hecht's store at Friendly Center was orginally opened as Thalhimers in 1967 and was the largest anchor in the open-air mall at 50,000 square feet on one level, with a second level reserved for storage and future expansion. It replaced a smaller Ellis-Stone store located elsewhere in the shopping center.

Thalhimers operated its Greensboro stores as Ellis-Stone from their purchase of the downtown Greensboro store of that name in 1950, through the opening of the Friendly Center store in 1957, until the erection of this building.

The dramatic concrete-panel arches with brick fills were considered elegant and modern at the time of the store's design and provided a distinctive exterior face to the store when compared to the spartan original design of Friendly Center, which mostly featured brick buildings with aluminum canopies. Thalhimers also featured a collonade around three sides of the building and four front showcases resembling bay windows on the otherwise blank exterior walls.

Expansion of Thahinmers occoured after the closing of the downtown store, three miles east, in 1975 and the additon of a smaller store at Four Seasons Mall, three miles southwest, that same year. The mall store soon totalled 97,000 square feet on two levels.

In 1990, Thalhimers was purchsed by the May Department Stores Company which operated the chain as a seperate division until 1992, when it was folded into May's Hecht's division. The Friendly Center store was retained, even as May closed several of its sister stores in the area, including the Four Seasons location.

After years of decline, Friendly Center began to attract upscale merchants in the mid '90s. The mall was revitalized and portions of it were rebuilt. As the anchor with a central location in the center, Hecht's became a major part of the new upswing and sales grew enough to justify a major expansion of the Friendly Center store, especially after the deal for a larger replacement store at Four Seasons fell through.

Opened in 1997, the new expansion added nearly 50,000 square feet on two levels to the old store and was augmented by a major interior renovation, the first in over a decade. The old exterior design was continued in the additon, with a second major entrance added, facing a new retail building and a rebuilt Belk store.

The original collonade was added to the interior space of the store on the sides of the building and was not continued to the expansion. The showcases were also removed at that time.

This store is still an integral part of Hecht's future, with sales that are well above company averege. It was joined by an additonal free-standing location four miles southwest along Interstate 40 at Wendover Avenue in 2002.
Posted by Livemalls at 6:48:00 AM